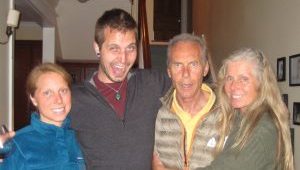 We left off in the initial stages of suspending all the ideas about what is going to happen, now that an incurable disease has been pronounced. It takes concentration to consciously let go of all the difficult horrible possibilities that naturally flow to mind after being told the bad news.

When Andy was told he had Parkinson’s disease and that his life would go downhill from now on, (his doctor actually said that) it was easy to be depressed. It felt like we were in uncharted territory and only had each other to hold onto. It felt like we had been thrown into hell, “Do Not Pass Go”, and we began grieving the lives we’d been told were now lost or would soon only be a memory as the disease stormed on.

For us, it was an important piece of the healing process, which the dictionary defines as “becoming sound or healthy again”, to look at the possibilities that the first doctors we saw explained to be certainties, and to feel the fear that bubbled up. It was actually the first step we needed to take to wake up from that nightmare and find our way to something else. For a very short time we let ourselves imagine a disabled life in a wheelchair, an incoherent mind, being unable to communicate, a shaking man entirely dependent, lives diminished, unable to work or play, relegated to being people others pitied, were all scenarios we looked at. We needed to look at what we were afraid of in order to discover the way through. Being in uncharted territory was a trigger that allowed fear to bust in.

The next step was to recognize that we were NOT REALLY in uncharted territory. We were mature people who had lived full lives and faced many times of being challenged. We’d travelled to difficult places without any back up. We homeschooled our kids, without the support of society, and they thrived. We’d gone bankrupt and come out of it. We’d fallen in love with people other than each other and our marriage was able to heal and continue. We’d trained for big races and failed. Without question, we’d been in uncharted waters before and we’d found our way through.

Being sound is defined as “healthy, not diseased, injured or rotten” and that was our aim.

Now is the time to take heart from the very experiences your own lives have given you. Think about a time of challenge, difficulty, or bad news, from your past, and see the similarities in this time of being diagnosed with an incurable disease. When Andy and I sailed our boat, from Guatemala to Florida, through a storm in the Gulf of Mexico, we knew we couldn’t stop the storm. We had to recalibrate ourselves to be to be able to take the steps needed to put our boat in a position to get through it. This is exactly what needs to be done when diagnosed with an incurable disease.

Once you are able to be in the mystery of the moment and have stopped yourself from assuming negative outcomes, the next step is to protect yourself from slanted bad views about your situation that come streaming in from other people. Negative prognoses, stories about people who suffer with the same condition, celebrities who commit suicide because they were diagnosed with an incurable disease, all serve to keep you locked in despair.

NOW is the time to reject those influences. We all have choices about who we listen to and what we believe. Now it is vital to move away from those who are full of fearful information about what you have been diagnosed with. It is time to let certain associations and even friendships go. It is time to change doctors, if one’s doctor is forecasting a negative outcome. It is time to protect oneself from this toxic information. I say this very seriously, because this was the first hurdle Andy and I had to get over in order to set ourselves up for healing, or becoming sound.