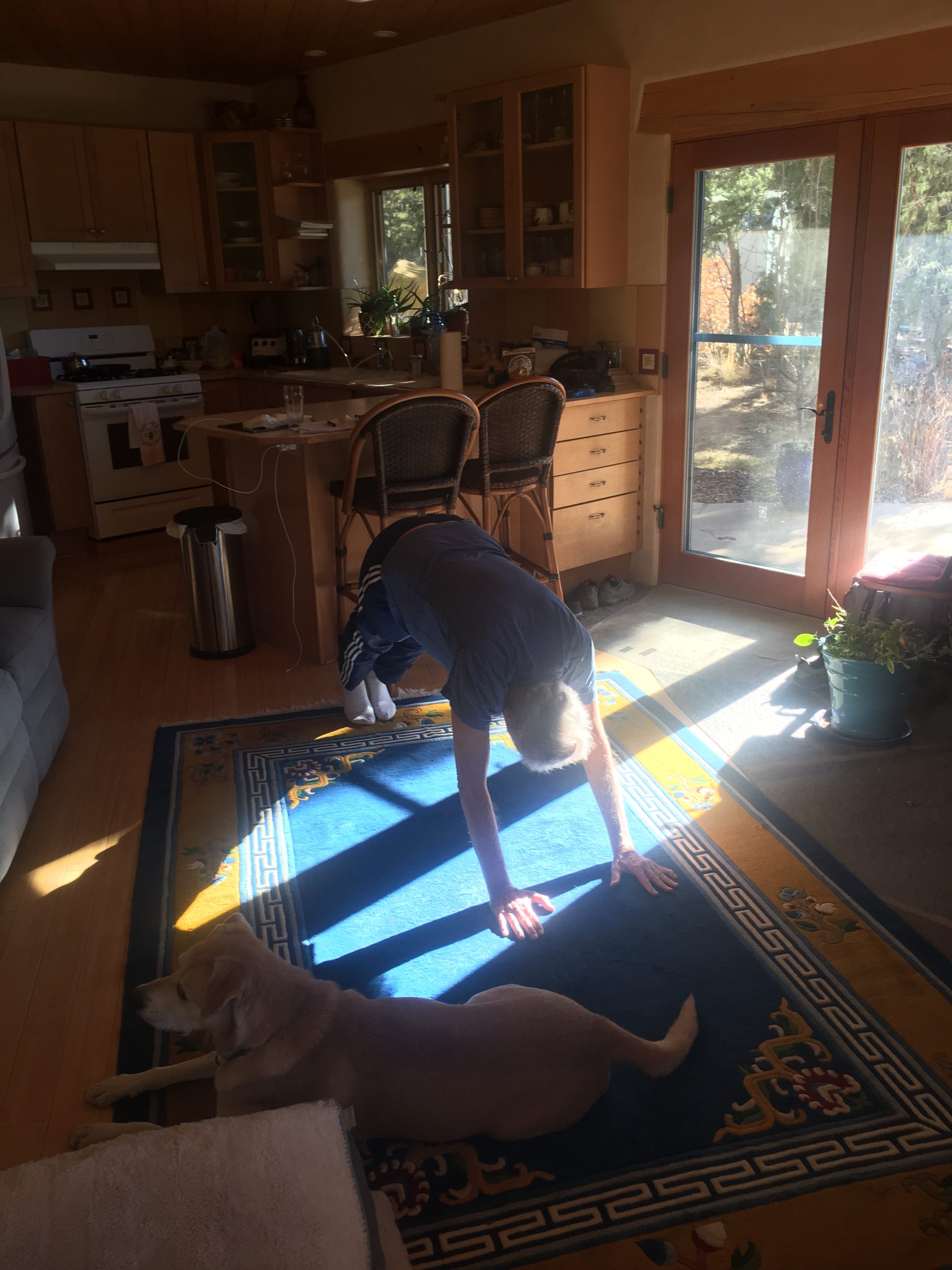 There is a lot of trusting without evidence required to live well with Parkinson’s disease. Yoga can be a window into improving the brain/body health of the patient and for us, gives evidence of Andy’s continuing ability to improve.

This is one of the symptoms that most patients do experience at some point in the course of living with Parkinson’s. It is strange to witness and even stranger to live with. Andy would be standing at our kitchen counter, perhaps taking some medicine, and he would not be able to move away from the counter. His body had frozen.

I also noticed that he had become prone to staying in one position for a longer than healthy period of time. Although this served him on a 15 hour flight to India, in every other situation it was not just unnatural but caused harm in his ability to move.

I gave him assistance to move away from the counter. Usually, if I held his waist and gently nudged him around, it did the trick. If he was alone, he had to muster up a big effort and push himself into a turn. This was not ideal because such a big effort could also backfire into a fall.

We discovered that these symptoms were able to be improved with practice. Using the two systems (body and brain) together without other distractions, through conscious repetition and rhythm helped a lot. I believe this is why boxing, stationary bicycling and dancing have all been used successfully to help Parkinson’s patients keep moving in their daily lives.

Andy does use a stationary bicycle but it appears that being led in a yoga routine is even more helpful for him. For 20-40 minutes on most days, I lead Andy in a yoga class. He has to process my directions in his brain and then execute the movements required to physically accomplish cobra, downward dog, cat cow, bridge, dead bug and many other body positions.

During every class I am reminded of the adage, “use it or lose it,” as I watch Andy’s brain and body work together again in harmony.

There is a lot of trusting without evidence required to live well with Parkinson’s disease. Yoga can be a window into improving the brain/body health of the patient and for us, gives evidence of Andy’s continuing ability to improve.

What can seem like a dead end doesn’t always have to be. Sometimes Andy can appear to be stagnant just before another breakthrough happens.

Try it for yourself and see what happens.

2 thoughts on “Antidotes for Stiffness and Freezing in Parkinson’s”