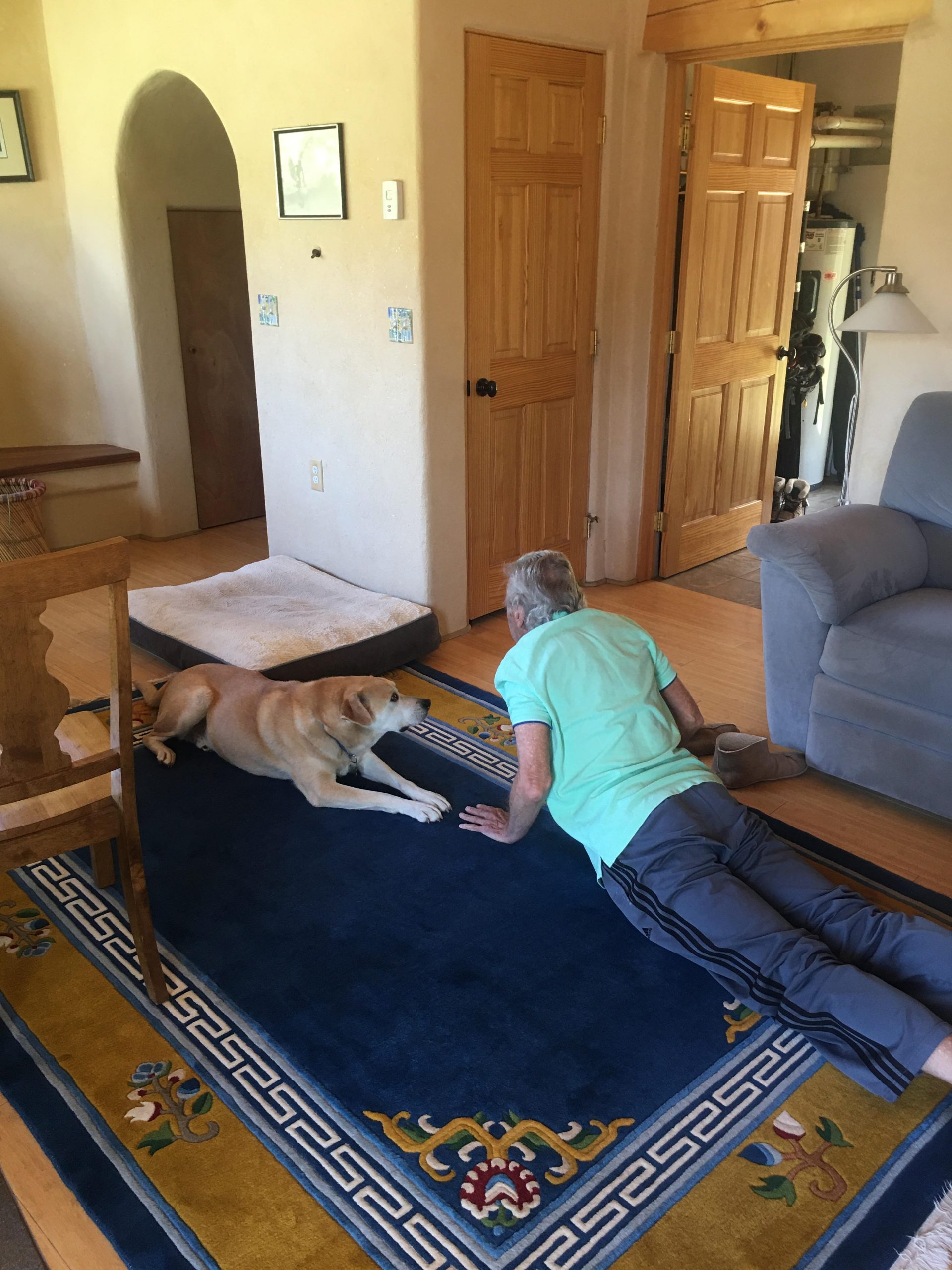 We are in our seventeenth year of Andy having this disease. Although he stopped practicing yoga for many years as his shaking became a hindrance, he has taken it up again.

Many forms of movement engaged in while one lives with an illness are likely to be possible and fun, especially if they were activities done by the patient before the illness. We are in our seventeenth year of Andy having this disease. Although he stopped practicing yoga for many years as his shaking became a hindrance, he has taken it up again.

Andy practiced daily yoga beginning in his late twenties until he was diagnosed with Parkinson’s at age fifty nine. Each morning we would take turns setting ourselves up on a blue and white Tibetan style rug, in the only open space in our housetruck, and cycle through a series of asanas and poses for about forty five minutes before our morning of work, chores and life began. Our children grew up understanding that the day would get going for them only after Dad and Mom completed morning yoga. Our thirty year practice became deeply ingrained and Andy’s first years of living with Parkinson’s were enhanced as he kept it up.

Something I noticed when Andy practiced yoga, was a blissful facial expression that came over him no matter what else was going on.

I saw how the ritual of movement kept Andy’s body more able even as the symptoms of Parkinson’s started to make it harder. Later, those increasing symptoms made it impossible. His muscles no longer responded to a stretch by extending and releasing. Instead, they would contract and pull against the very movement he was attempting. Yoga became counterproductive and made Andy more stiff and uncomfortable. It also became dangerous because Parkinson’s made him lose his balance when bending into poses.

Parkinson’s also disallows many patients the ability to have accurate facial expressions. It is called ‘the mask’ and it happened to Andy. He might have felt happy inside but his face always looked serious, angry and void of animation–it was disconcerting.

After DBS (Deep Brain Stimulation) surgery his shaking stopped and we recently started a yoga practice once again. It is different now. Not better and not worse, only different and we embrace that. Parkinson’s never ends and so challenges continue, as do new opportunities. In our past, I taught yoga at a ballet school and to private clients and now I lead Andy through a thirty minute session most mornings.

Not everything we lose comes back to us, as our lives proceed, but with an attitude of possibility (and a little luck) many things we’ve loved and lost do return, as yoga has for us.

What are you missing and what can you do to manifest a return?