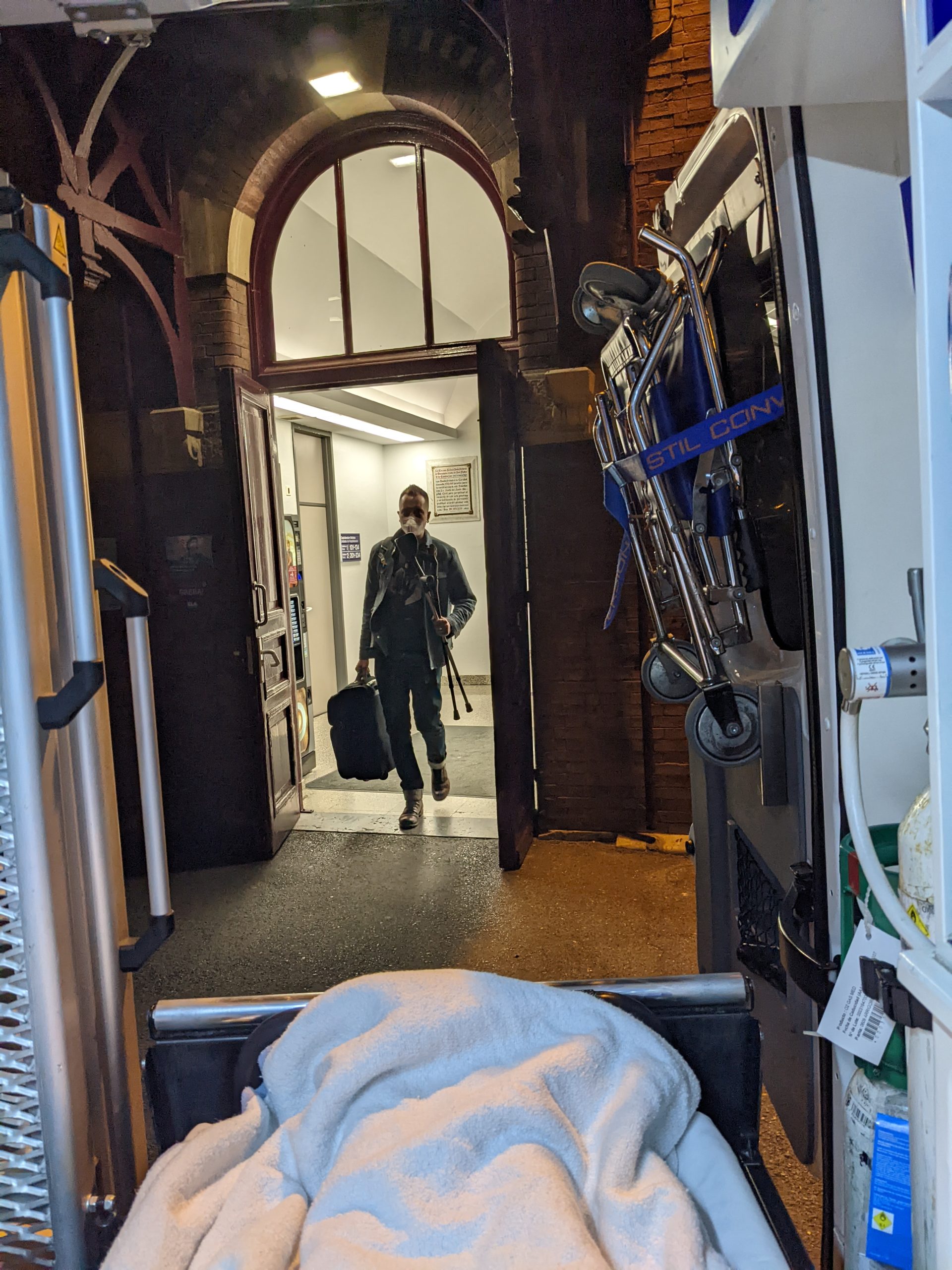 I lay in that bed for ten days.

Just before the ambulance came to evacuate us, I made it for the first time to the bathroom, with crutches and being held up by Brendan. I used the toilet and changed from my hospital gown into clothes and then was helped onto the gurney and began our odyssey traveling home.

The images that I remember from that day are sharp because, without being able to write anything down, I had developed powerful ways of observing.

-The starkness of the gaping hospital door I saw as I lay in the ambulance waiting for Brendan to come out and the relief finally seeing his silhouette coming towards me.

-Nostalgia driving out of the medical complex and identifying my room from the open window in a vast brick wall of closed windows.

-The beauty of the mountainous landscape and the lights shining in the darkness of a city not yet awake.

-The movement of the ambulance allowing me to soar through space.

-Arriving at the airport and feeling very vulnerable without my hospital bed or the vehicle around me, as I was put in a wheelchair and the ambulance drove away.

-Being left for a few moments in the airport lobby while Brendan went to check about who was going to help us to the gate.

-Being pushed to our gate and realizing there was no jet bridge-only stairways to walk up to the plane and wondering what would happen? How would I ever board?

A giant cherry picker type of vehicle drove up and a second lady in a wheelchair materialized. Both of us were pushed to this truck and were lifted high on a ramp before being driven to the plane and pushed to our seats.

We had to fly in the wrong direction, to Munich, Germany before getting on the plane to the USA. We were met in Munch by the wheelchair pusher from heaven. He wheeled us through all the back ways of the airport until we got to our gate and boarded, me barely able to crutch down the aisle and Brendan and I both falling into our business class seats, bought for us by the insurance,  with relief.

Without Brendan’s sturdy strength and easy know how I would not have made it. Each step was made as a team and that was my saving grace.

We landed in Chicago and wheeled through customs, still there was much uncertainty. Our bags showed up but the ambulance wasn’t there. We called the travel insurance company and were told the ambulance was on its way.

We were a spectacle as the police wouldn’t let the ambulance into the inner circle for taxis and so all traffic stopped as the ambulance blocked the way and everyone was halted until I was loaded up and in, but the medics had a sense of humor and reassured us. I guess there are privileges when driving an ambulance.

I faced backwards again as we negotiated through Chicago traffic and eventually arrived at my brother and sister in law’s home. They had an old ramp they had set up and I was wheeled into the house and into my rented hospital bed.

Brendan stayed that night and I couldn’t imagine him ever leaving.

I felt the joy and confidence of verbal communication again.