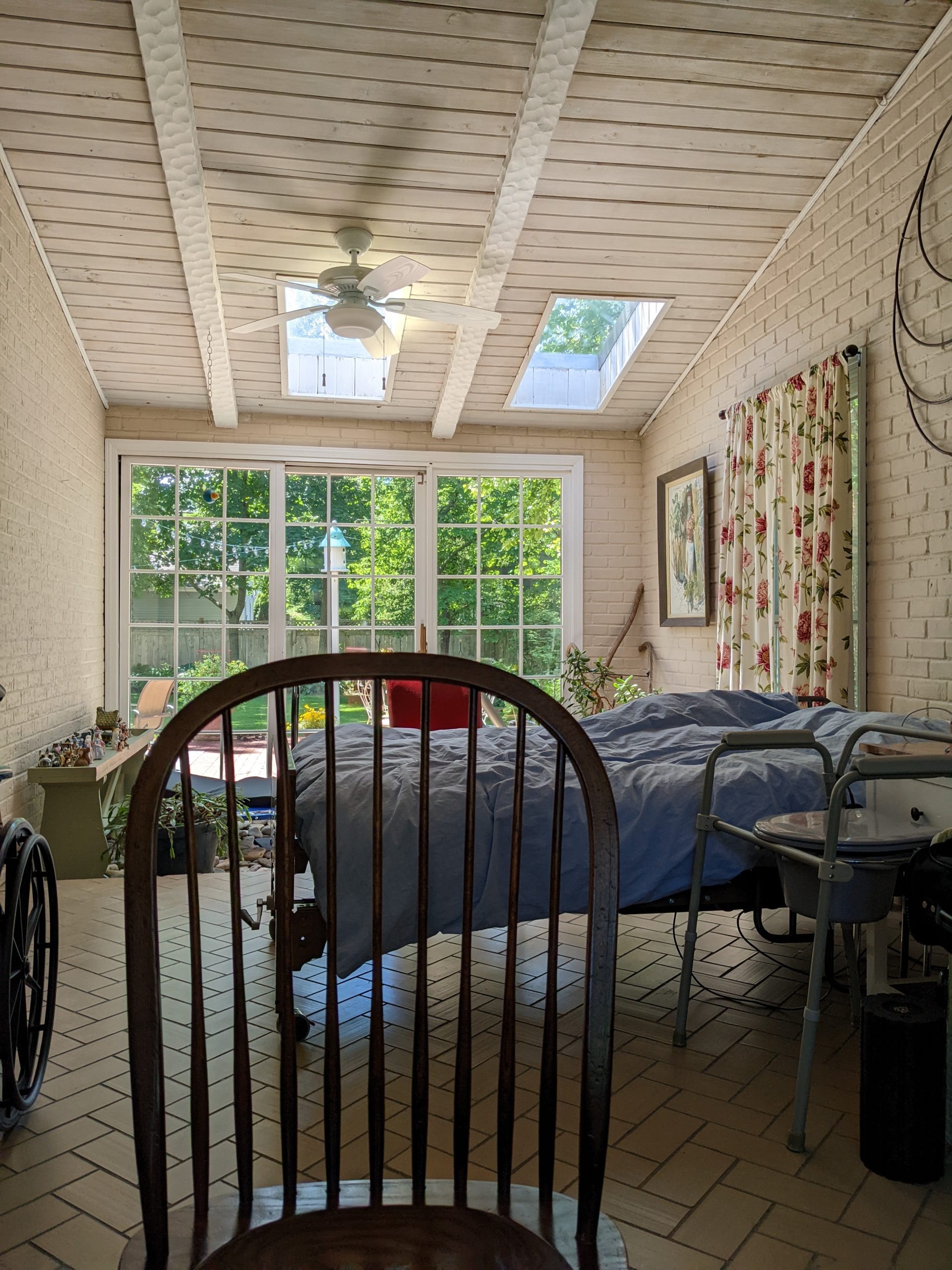 I felt completely welcome which surprised me because I was plopped in the middle of a house that was not my own and I needed help to do everything.

Some experiences are so profound that words seem inadequate to describe them.

They put me in the garden room.

There was a storm that first night which raged loudly with rain pounding on the roof, punctuated by thunderclaps and lightning flashes, all night long. I burrowed into a bed softer than I thought wise, but woke with no backache and more rested than since before my fall.

I felt completely welcome which surprised me because I was plopped in the middle of a house that was not my own and I needed help to do everything.

When my sister in law, Jenni, was younger she was a spritely girl with an intelligence and a worldly attitude hidden by her adorable physical beauty. As a woman and a grandmother she has solidified those qualities into confidence that only an older woman can embody.

I knew we were friends but I learned what a true friend she really was. Jenni was my lifeline-preparing food, helping me get to the bathroom, wheeling me on outings to the garden, the garden store, and to the beach. She offered me her confidence and I put it towards healing. I accepted her helping hand and held it until my own confidence showed up.

My daughter and sister also came to help me. Alana washed my hair in the kitchen sink and Kathy wheeled me around the neighborhood while we talked and laughed together and cooked meals. It was fun having such care and attention and I soaked it up like a repotted plant soaks water, out of need and also respect for what I was being given.

My brother and I share round blue eyes. While I was living in the middle of his house, our paths would naturally cross every day. I noticed a sparkle in his eyes each time we interacted. Tom was never one to hide his true feelings and I knew I was welcome in his home because of that sparkle.

Jenni wheeled me around the house until one day I pushed off with my legs, extra hard, and was able to bump myself over the raised threshold from the garden room into the rest of the house. From then on I had a different level of freedom as I walked my wheelchair from room to room. It was a milestone crossed. I also had a walker that I used to maneuver from the wheelchair into the bathroom. It was heaven having a bathroom I could use after not having that luxury for 2 weeks.

One day Jenni said, “Do you want to do some errands with me?” I really did. To be driven in a car sounded fun, but I wasn’t sure I could get down the 2 steps from the house into the garage. I knew I could stand up from my wheelchair and go a few steps. We figured it out together. Jenni pushed me in my wheelchair out her front door and thirty feet down a bumpy brick walkway to the curb. I sat there while she walked around the side of the house to the garage, loaded up my walker into her car and drove to the curb. She brought my walker to me, opened the passenger door and guarded me while I stood up and inched into the car seat, easing my broken leg in gently. She loaded up my walker and wheelchair and off we went!

It was my first ride in a car that wasn’t an ambulance since my fall.

There were many ‘firsts’ with Jenni during my month in the garden room.

I became able to wheel around the house easily and quickly- especially enjoying going backwards fast. My left hand being in a cast made me only able to use my feet to get around. There was the first time I made my own tea in the morning, from the low kitchen counter, the first time going down 2 steps with my walker so as to be able to sit outside at the patio table, the first time I was left at the house alone for an evening.

That first car ride we went to Pasquesis Garden Center and Jenni wheeled me around the store and through the greenhouses. A child sitting in a shopping cart pushed by her mother stared at me. Her mom said, “That lady has a special ride.” I smiled as did the child, Jenni and the mom. People treated me nicely when I was wheelchair bound. Jenni told me, “In physical therapy school we had to spend a day in a wheelchair to learn what it felt like.”

I felt safe with Jenni.

She took me on many outings as my healing month progressed. We went to the beach, the grocery store, on drives checking out mansions, to the bakery for donuts, through the cemetery finding old headstones, but mostly to the beach.

As the weeks wore on, I learned to wheel myself to the curb and I ditched that walker altogether because I was able to get into the car and the bathroom without it. We evolved from Jenni’s comfortable SUV to their snazzy white convertible and drove with the top down.

My brother chose movies the three of us watched together in the evenings- old Hitchcock- Notorious and North By Northwest. We talked a lot at our family dinners and I was let in on some of the goals they were working towards.

It got hot- summer in the Midwest is hot. We took a couple evening strolls at the beach, driving there in the convertible. Tom and Jenni walked the pathway hand in hand and I sat on one of the benches and watched the lake, the sky and children playing as night came on and the temperatures finally cooled.

Eventually the physical therapy Jenni taught me combined with loving care and time passing got me to the point of using crutches. I could do a lot on crutches but it was exhausting. Jenni reminded me to rest. She worked every day in her big garden and she rested too. I saw a lifestyle where resting was honored and part of living.

This missive wouldn’t be complete without mentioning the ever present neighbors Jenni and Tom and I lived with. They were always part of our days and we unabashedly watched their comings and goings because they were such show offs. They were the Baltimore Orioles, Wrens and Cardinals!

Now that I’m home in New Mexico I can see how all their care also moved my heart and grew my capacity for loving life. I am left with a bigger understanding of humanity and our individual trials, quirks and kindnesses. I am marked by my time in the garden room and I will never be the same.